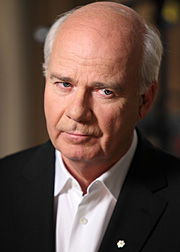 Peter Mansbridge is the former Chief Correspondent of CBC Television News. Now in his fifth decade with CBC News, Mr. Mansbridge has provided coverage for some of Canada’s most compelling stories, including twelve federal elections, three referendums and various major international events.

Mr. Mansbridge has won many awards of merit during his distinguished career, including thirteen awards for excellence in broadcast journalism.

Mr. Mansbridge has been honoured by several institutes of higher learning. He has received honorary degrees from ten Canadian universities. He was also named the 1998 Wolfers’ Fellow at Yale University. In 2001, he was invited to lecture at Oxford University in England as part of its distinguished speakers series. He is past Chancellor of Mount Allison University in New Brunswick and is an officer of the Order of Canada.